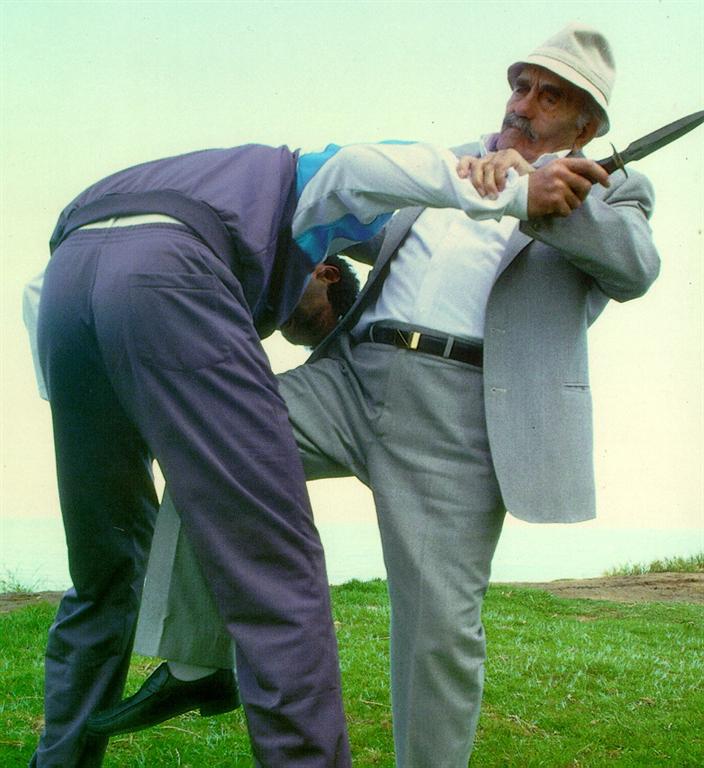 Krav Maga was developed by Czechoslovakian-born Imi Lichtenfeld, the son of a renowned police officer in Bratislava. Imi was a champion heavyweight boxer, an expert in Ju-Jitsu and Judo as well as a dancer and trapeze acrobat. Imi's family was forced to emigrate, eventually landing in what was then Palestine and is now known as Israel.

Soon after the Israeli state was established in 1948, Imi was asked to develop a system of fighting and self-defense for the Israeli Defense Force (IDF). Imi carefully refined Krav Maga during his career as chief instructor of hand-to-hand combat for the IDF. Beginning with special forces units like the Haganah, Palmack, and Palyam, Krav Maga became the official combative training for all military personnel, Israeli police and security forces. Faced with the task of preparing both fit and out-of-shape soldiers, Imi developed a comprehensive system that relied on simple, instinctive moves rather than rigid techniques requiring years of training.

In 1964, Imi retired from the IDF and began teaching Krav Maga to civilians, law enforcement, and military applications. In 1978, Imi and several of his students created the Krav Maga Association, which was aimed at promoting the teaching of Krav Maga in Israel and throughout the world.

In 1981, the Krav Maga Association of Israel and the Israeli Ministry of Education held the first International Instructor's Course at Wingate Institute for Physical Education. A delegation of 23 members from various cities in the U.S. attended the course, which was supervised by Imi himself. Another instructor conducting that program was Eyal Yanilov, one of Imi's closest advisors and now President of the International Krav Maga Federation. Californian Darren Levine was selected to be part of the delegation because of his martial arts and boxing background, as well as his involvement in the physical education program at the Heschel Day School near L.A. During the course, Imi befriended Levine and told him that he would come to the U.S. to teach and train him.

Levine went on to offer Krav Maga classes at the Heschel Day School. At Imi's request, Levine and one of his students, Joel Bernstein, along with other prominent members of the Jewish community in L.A., formed the Krav Maga Association of America, Inc. In 1987, Levine and his top students began teaching Krav Maga to law enforcement in the U.S. Under Imi's guidance, they adapted Krav Maga to suit the needs of U.S. law enforcement and military personnel.

Shortly after Levine received his 6th degree black belt in Krav Maga, Imi awarded him a Founder's Diploma for Special Excellence in Krav Maga. Imi has awarded this diploma only twice. Eyal Yanilov had also received the prestigious diploma. These diplomas were given to the people that Imi wanted to be the leaders of Krav Maga.

Krav Maga Worldwide Enterprises was formed in January of 1999 to expand and promote Krav Maga in the U.S. and around the world. Krav Maga is rapidly gaining in popularity and almost 10,000 people are currently studying the art. It is widely used by members of the U.S.'s local, state and federal police agencies, including the FBI, Secret Service and the Bureau of Alcohol, Tobacco & Firearms. Celebrities practicing Krav Maga include singer/actress Jennifer Lopez, and actresses Jennifer Garner ("Alias"), Shannon Elizabeth ("American Pie"), and Mia Kirshner ("Wolf Lake").